@WG-prioritization have prepared the meeting agenda

@matklad do you have something you want to share about @WG-rls2.0?

@Wesley Wiser do you have something you want to share about @WG-self-profile?

Hi @T-compiler/meeting, triage meeting will be starting in ~ 52 minutes

Check out the meeting agenda

if so, please fill checkins directly in the agenda

Ah, sorry, thanks for the reminder, I'll fill this up now!

@Santiago Pastorino i think I need edit rights for the note

not sure if this is the right place to mention it, but I was interested in adding a new S-waiting-on-help tag, could that get added to the agenda? (near the end is fine, it's not high priority)

@matklad What's your HackMD username? I think I can add you

not sure if this is the right place to mention it, but I was interested in adding a new S-waiting-on-help tag, could that get added to the agenda? (near the end is fine, it's not high priority)

sorry all for delay; laptop. is being pokey

or maybe its finally time for me to switch to Chrome

Hi @T-compiler/meeting! Add a :wave: emoji to show you're here :)

we will start off with 5 minutes for ...

So, a sort of non-standard announcement

I'm sure you all are aware that Mozilla let go of a number of employees yesterday.

I am one of those employees. More broadly, the set of people Mozilla let go basically represents a vast reduction in their investment in Rust

(or rather, the staff reduction was announced on Tuesday, not yesterday)

I should say that I was not laid off, nor njn

anyway, I've been thinking a lot about what all this means since then.

For example: I've often said that the goals of Rust are very much aligned with. Mozilla's goals

but now, for various reasons, Mozilla has decided they cannot afford to continue that investment

in the end, they are different missions

and, in my semi-humble opinion

I think Rust's mission is more important than Mozilla's.

this is all a way to say that I'm planning to stick around, at least for the short term

I'll continue on as T-compiler member, and co-lead, as long as I can

(I'm still trying to figure out whether it makes sense for me to. continue in other roles, like T-lang. member. But that's less relevant to this meeting.)

so, yeah. Not the typical announcement

and we'll have to see what we can do to. further decouple the two

so lets see, were there other announcements?

We're also able to highlight the first few projects that have been selected by our open source-contributing employees through the Microsoft FOSS Fund to receive $10,000 sponsorships... @eslint, @rust_analyzer, and ImageSharp created by @James_M_South. 3/4 https://twitter.com/jeffwilcox/status/1293678932433055745/photo/1 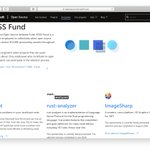 (omg on the rdpmc stuff)

(OTOH, if you look at wall-time vs the other measurements on perf.r-l.o you can easily see why that would be the case)

You can get things like cache miss counts from. rdpmc, right?

e.g., pure instruction counts can sometimes not really reflect the reality of where time is actually spent.

yeah, sadly it would probably be too expensive to record more than one thing, but we can experiment with it

I've tried not to mess with the measureme event format but at least now we have a precise way to quantify the overhead of profiling (e.g. I now roughly know that getting one value out of rdpmc, compared to a hardcoded 0, is about 20 instructions)

its. basically just adding a new type inference variable, or at least turning a T == V into T <: V (or maybe other way around)

that, or maybe harmful !

basically if it was typed as T: Index<U>, we convert to T: IndexMut<U> with the same U

I mean, we've definitely had cases where. you needed invariance

unless I am confused

I don't think this is adding a new variable

oh right, its not

more the opposite probably

I missed the note that it was looking it up somewhere

okay then, this is probably just a bug fix then

I get it now

ugh speaking of things assigned to me, please PM me for reviews, I'm so hopelessly behind everything

I was hoping to catch up this week on notifications and reviews :)

or its regression status is not tagged. on the issue.../.]

description indicates it is stable-to-stable regression

it seems a stable regression

it would have to be, yeah, test ICEs on stable

I'm sort of "shrug" on this one

it could ride the trains

is this an ICE any time that there are many {}?

because that's... fairly common for me, anyway

I'd be inclined to at least beta backport

(usually occurs when I modify the format string)

All of using an r"" literal, having a named argument, and referencing at least 3 positional arguments seem necessary.

then never mind, I agree :)

if there were evidence that it didn't require all those compoennts...

but yeah, lets let this ride the trains then.

I haven't had chance to even experiment to see what impact (positive or negative) would be. of changing the range.rs code

but I myself may have less time to investigate ....

well, I can leave it assigned to me for one more week.

(cut-and-paste error. along the way?)

looks like this could just be assigned to @Matthew Jasper

it is in fact (self-)assigned to them

/me is excited for https://github.com/rust-lang/rust/pull/73905 to land, on a somewhat related note

btw @XAMPPRocky has created a calendar to track Rust releases, I should have said that in announcements

I'll try to get a PR for this up today.

btw XAMPPRocky has created a calendar to track Rust releases, I should have said that in announcements

there is a potentially cleaner fix for this in #75443

sounds like some great team work between @eddyb and @RalfJ

/me wonders if @RalfJ should be subscribed to this stream. Probably, right?

which needs signoff by either @nikomatsakis or @Matthew Jasper afaict

there is a potentially cleaner fix for this in #75443

ah, that also fixes the regression?

@nikomatsakis yeah I uhhh screwed up a long time ago

somehow this hasn't bitten us until recently

I can r+ that now I think

we can afford. to wait a week before discussing a beta-nomination of PR #75313 ?

or should we just quickly beta-nominate it now?

let it land on. nightly

there won't be more beta crater or whatever

and we can backport tonight/tomorrow or 7 days from now

that bisection is interesting

should we reach out more directly to @Petr Hosek and @tmandry ?

this note in description on rust#72746 is interesting: "This matches the CMake build of libunwind. "

does that imply that CMake's build would suffer from same problem?

but not a terrible amount of time

what tier is this platform? does this only happen under QEMU armv7, not hardware armv7 ?

this is due to lock poisoning ?

i.e. it could be some sort of race condition issue?

yeah something is getting poisoned it seems, based on the backtrace in the description (need to open a details toggle)

but it's not that interesting

well the. most immediate. question is

can. anyone take charge. on this

I wonder if @Robin Randhawa might have a suggestion for someone

/me hopes he got the right Robin

we don't have tier 1 arm yet I think

Though we have a pending RFC for aarch64 at least :)

/me just checked against https://forge.rust-lang.org/release/platform-support.html

so its not end-of-world for this to hit stable

so okay, leave it as P-high, and unassigned, I guess.

I'll set some time aside to dig a bit deeper!

seems to me like this is maybe not so high priority?

its mostly an issue that one error has been replaced with a worse (less helpful and/or specific) error, right?

I remember seeing that go by

trying to remember if I had formed an opinion

I'm tempted to downgrade to P-medium, even though it is a regression

oh right because it was bisected to me

anyway I want to make fwd progress on myg

1 regression, 1 improvement, 1 of them on rollups.
0 outstanding nags from last week.

it was prioritized as P-high as a mejor diagnostic regression

it was prioritized as P-high as a mejor diagnostic regression

although it can be changed, but we can continue discussing on that thread if you want :)

performance review seems okay to me, in any case

thanks to everyone in @T-compiler/meeting for attending!

and as a reminder: no design meeting tomorrow

yeah the triage logs are updated not too often; the nag will be checked at next triage

@Joshua Nelson wanted to discuss something about a new label

@Santiago Pastorino what was prioritized as "P-high"?

you can shorten that to S-welp

Santiago Pastorino what was prioritized as "P-high"?

maybe S-needs-help if you want it to be short

but the reason I thought of it is https://github.com/rust-lang/rust/pull/72412#issuecomment-667217945 wasn't handled very well IMO

(no fault of the triager)

well it's not really ready for review

I think I feel the same as @Esteban Küber

it seems like it is waiting for review, in the sense that the reviewer is the one to dispatch requests from help generally

i.e., I would have thought of it as "waiting for review", but maybe it's helpful to distinguish

if it was help from someone else, the label would make more sense hmm yeah

hmm so 'waiting for review' includes PRs that aren't ready to merge?

I guess that sort of makes sense

I will note that I filter my assigned PRs by waiting for review, so if that's not the label then I'd just not see it

to be quite honest, I find that unless the setting is waiting-for-bors or team, the labels betwen "waiting on author" and "waiting on review" etc is often either outdated or just kind of "hard to summarize"

can we ask triage to be less eager to switch to waiting-on-author then?

maybe we need a S-unclear :)

@Joshua Nelson sure, if you have concerns over labeling we can take those to #t-release/triage, I'm guessing there's adjustments that can be made

that said I think that it probably is useful for reviews to use the labels to signal when they are waiting for feedback (and it might be useful to help e.g. me when going over my PR queue)

another place this came up was for https://github.com/rust-lang/rust/pull/75127

where I wasn't sure the right approach to take

so there was nothing to review

just a different kind of review

hmm I guess so

ok I'll take this to wg-triage then :)

This is true, but I guess I just hope that triage assigns the right label "soon enough" or that the author pings me and I see that

but I don't feel as strongly about that one

@Joshua Nelson we already have S-waiting-on-fcp

other way around, sorry, S-waiting-on-mcp