If we find cargo-watch.enablein the config then a field with the value and default to true?

But .has() already checks that the config value is present, that default would never be set then I guess ...

We leave it null if not in config, to use server default if I recall

This is very confusing ...

Yes, the env var should override the config

Some of this is unfortunatelly inherent in the fact that there's no cross-editor way to handle configs...

Long-term, we should add a cargo xtask which would take rust struct as a source of truth and generate the relevant secion of package.json (or the relevant config for any other editor)

We also should integrate proper path-dependent and dynamic configs.

In short, the current configuration handling lacks design at all.

Yes, I was thinking about our class Config it definitely needs amount of rework, its design a bit obstructs the introduction of Download latest language server command. I decided to move this feature to new PR and not bother doing it now, because it is likely to add to many changes to code.

Should we merge the PR then?

I think all the important bits are already in place?

Hmm, I just have a question. I was wondering on how to add graceful termination when language server is not available.
But we just eat this error and continue execution like this was a nothing here

Shoud we throw an error from activate() call here instead?

I think if the user than chacnges the settings, we should be able to activate the server allright?

Ie, if we failed at startup, it doesn't mean that we've failed for good?

Not saying that the current handing is reasonable, just that throwing in the towel in activate might not be the right thing to do

Hmm, yes, didn't think about that

I am also a bit scared to merge this today, if we are making a release soon ;)

Isn't it exactly the point of the realease to figure out which stuff is broken? :)

Well, if you think of release this way, I won't argue...

@matklad I see we have no place to put images (to reference them in markdown doc) in our repo. What is you recommendation on this? 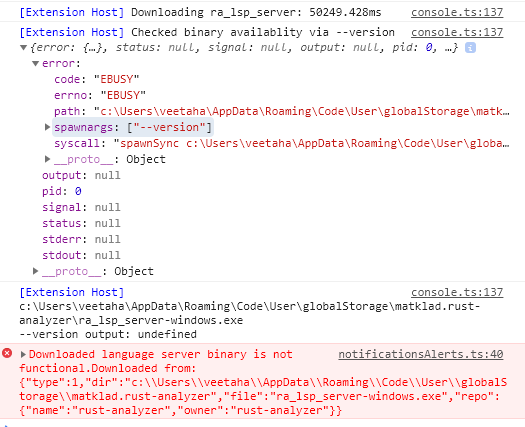 The syscall failed and didn't spawn anything I guess

what's the value of .error?

error <Error> The error object if the child process failed or timed out.

I see I cannot reproduce the error now...

I can try conditionally disabling chmod, though it is not reproducing now (

Maybe cause by Windows Defender ? :thinking:

Rebooted my laptop, reinstalled everything from scratch, and no more error... I guess if it was Windows Defender or any other thing it saved some state and doesn't try to prevent the binary from running anymore

@matklad I see we ship .vsix file via GitHub releases. While I am amending the docs, should I mention this in Installation from prebuilt binaries chapter?

@matklad , may I ask you to elaborate on the chosen versioning scheme? I am now working on versioning the installed prebuilt binary, so this is actual. Do we stick with YYYY-MM-DD?

Ideally, we should not care names and just pick the chronologically latest
release.

It might be prudent to filter out names with nightly though, for fwd compat

nightly as suffix or just as a substring at any position?

as a substring would be better I think

My only input here is that YYYY-MM-DD defeats the default of 0.1 from a source install so vscode automatically stomps cargo xtask install

@Jeremy Kolb do you now any docs about versions for VS Code?

let me just try this with -dev

Ok, even setting version to 0.2.0 doesn't not prevent VS Code from auto-updating. Quick googling hasn't revealed the proper solution here. I wonder if folks might know a workaround?

Also, a meta question: is there a Zulip / Discourse instance for developers of VS Code plugins? I feel I can make use of an area for shouting questions at people :)

Not sure how relevant it is for ext authors though

But @Jeremy Kolb , you mentioned that turning off auto-updates fixes this...

Well, it's a bit like saying that not using VS Code fixes it :)

Or can you disable auto-update for a specifc extension?

But how it determines "the latest"? Like, I've build extension today, with a higher version number, and it still isn't considered the latest

I think only Stackoverflow is to the rescue here...

FYI: regarding the stream.pipeline(). My report to nodejs team brought some fruits. It is confirmed to be a bug in filesystem core module

And this actually boggles my mind. Like, how is it possible that a piece of core infrastructure fails to properly close the file before signalling that the file is closed?

It's piece of cake. One lecturer in our university, who is very into NodeJS community told us that the nodejs core is very convoluted and messy. There are a cases when people write some core module, but then leave the project and noone knows how that code functions thereafter, even new PR to that codebase may dangle for a long while because people just can't review them properly.

@matklad I did some digging yesterday and didn't turn anything up. I half expect it's something weird like injecting "enableProposedApi: "true" in the json file.

I think the reason is much simpler

that would make more sense

I'd suggest to also describe why the version in package.json must be bigger in the comment

the exact why is in the commit message, which is reachable via git blame.

Yeah, not a fan of git blaming tho

@Mr Smeet I would refrain from making comments which contain purely value judgment, without any substance of actual discussion: significant number of people participate in this zulip, and such comment spend time of some number of those people, and also risk provoking unproductive discussions.

Mr Smeet I would refrain from making comments which contain purely value judgment, without any substance of actual discussion: significant number of people participate in this zulip, and such comment spend time of some number of those people, and also risk provoking unproductive discussions.

Ok, sorry. I just think there is some more correct solution, with pass setting for test instance or something like this

Sorry if I am to abrasive here, I should have expressed that in a friendlier way :(

I just think that's it's important to try to keep discussion on topic, and to minimize pings and notifications; one2many amplification is a significant issue, imo

That's a good wow, thank you for keeping the propper atmosphere in discussions

yeah, it's just that it is exactly a "value judgement without actual content for discussion", which pings me ;)