@Lukas Wirth this is a fun one (and utterly embarrassing, to be honest).

So, I've recently fixed O(N^2) behavior in SyntaxRewriter... But it is still kinda slow. I think the reason for this slowness is that it rebuilds the whole tree (we always allocate a new GreenNode, we don't try to re-use the old one). Aaaaand, even if we fix it, SyntaxRewriter will still be linear in the size of the file -- it traverses each and every node.

This actually defeats the purpose of our elaborate syntax trees, whose functional design is geared towards cheap O(height) modification. And the original C#'s SyntaxRewriter has the same issue. I guess we need to find a new abstraction for this...

Ye, I noticed that we clone the entire tree as well(I think I wrote that down in the issues we were talking about the slowness as well somewhere).
I also looked at how roslyn does it but I couldn't really get behind their node tracking stuff they are using, but I guess that doesn't change the complexity either then for them.

otoh, I am now inspired to maybe make the tree mutable&clonnable....

Won't that bring its fair share of problems as well though?

But I want to try this angle as well...

One Idea I tried out with SyntaxRewriter was to track what branches in a tree we only have to edit. As in whenever we add a new insert/replace/deletion to the Rewriter track down all the ancestors of the affected node so that we could skip unaffected branches entirely when rewriting.

Right I remember why that didn't work, since the root of the node thats passed into rewriting isnt necessarily a root of the edits

Ok, I am officially excited. I think we can have mutable immutable syntax trees :D

Argh, I had a beautiful writeup in the unposted issue, and the browser ate the contents of the text field. Never write longer text in a browser

How I Learned to Stop Worrying and Love Mutation

So this is what you meant with mutable immutable :big_smile:

How I Learned to Stop Worrying and Love Mutation

OMG, we should use this instead of "empowering everyone to build fast and reliable software"

@Steve Klabnik we need our best people on this

This is definitely something right up my alley and something I'd love to do, but: legal ownership of code I write right now is murky at best, and I don't want to saddle r-a with that. I'm planning to try to get an exception for Rust OSS contributions, but grad school is on break until January and I don't want to bother them on break.

@Poliorcetics mostly it's me being overly cautious (informal policy is that stuff done on your own time with your own resources is still yours, that's just not what the actual IP Agreement doc says). The reasoning they gave for it is that it simplifies knowing who actually owns what you make, and thus transferring full commercial rights to it to you if you ask for it.

I still think there could be a better middle ground, but the "all IP while you're employed [or enrolled] is the company's [or university's]" is common in the games industry :upside_down:

Informally I'm sure they'd be willing to give me a written doc exception for something clearly divorced from what we're doing there, it's just I've not gone through the effort yet, and I don't want to dump that question mark on someone else's project.

Here's the actual full clause in the IP Agreement. Split into multiple images for alt-text. I'm happy to remove/correct this take if it's based on an incorrect reading, but I highly doubt it. Pre-existing IP used in new IP is even just licensed, not ownership transferred. (7/6) https://twitter.com/CAD97_/status/1296118208034996224/photo/1 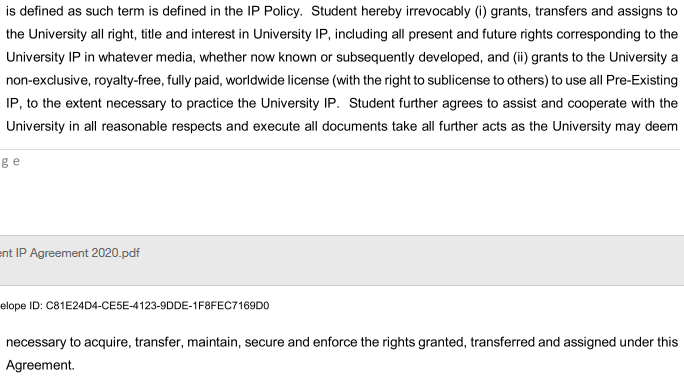 Coming back to this: there's another hairy corner I didn't consider that makes a looser version a bit harder to specify: students working on classwork on their own machines with their own engine licenses, not ones provided by the school. E.g. we have individual engine licenses. https://twitter.com/CAD97_/status/1296118208034996224

@Christopher Durham no worries, I am tagging you just so you are aware of the work in the area, as I expect you'll be interested in knowning what's going on :D

Naming Q: how would you name a method of a tree node, which removes the node from the tree? n.name_me()?

After this call, the original tree doesn't have n, and n is a root of a new tree

I'll try to extend the prototype to also track text ranges of nodes. I also want to explore whether we can retain fn token_text(&self) -> &self signature

the stuff is horrifyingly unsafe inside :(

Benches also regress a bit, but I believe that is livable (and there are a couple optimizations we could employ to get some perf back)

Did it get slower because of the struct size increase?

I think that would be part of that

another part is that we now iterate calling next_sibling repeatedly, rather than itering a slice of green nodes

And there's a bit of Cellgets/sets on the immutable path, they migh cause issues

// The following links only have meaning when state is Mut``

Are they also used/set/kept track of when it's Imm?

I mean, I guess they can't be moved to Imm

triomphe is published I think?