Description: Discussing about what Unsafe Code means. Or doesn't.

perhaps a question more for libs team. is there an existing guideline for defining certain types of PRs using unsafe that should require a fcp, such as public data structures in std? would it make sense to require group reviews for changes such as #52553 ? (opened issues that followed: #53529 #53564 #53566)

seems like a decent idea, but I'm not sure -- would definitely be something to ask the libs team

@memoryruins we have all the unsafe guidelines we need 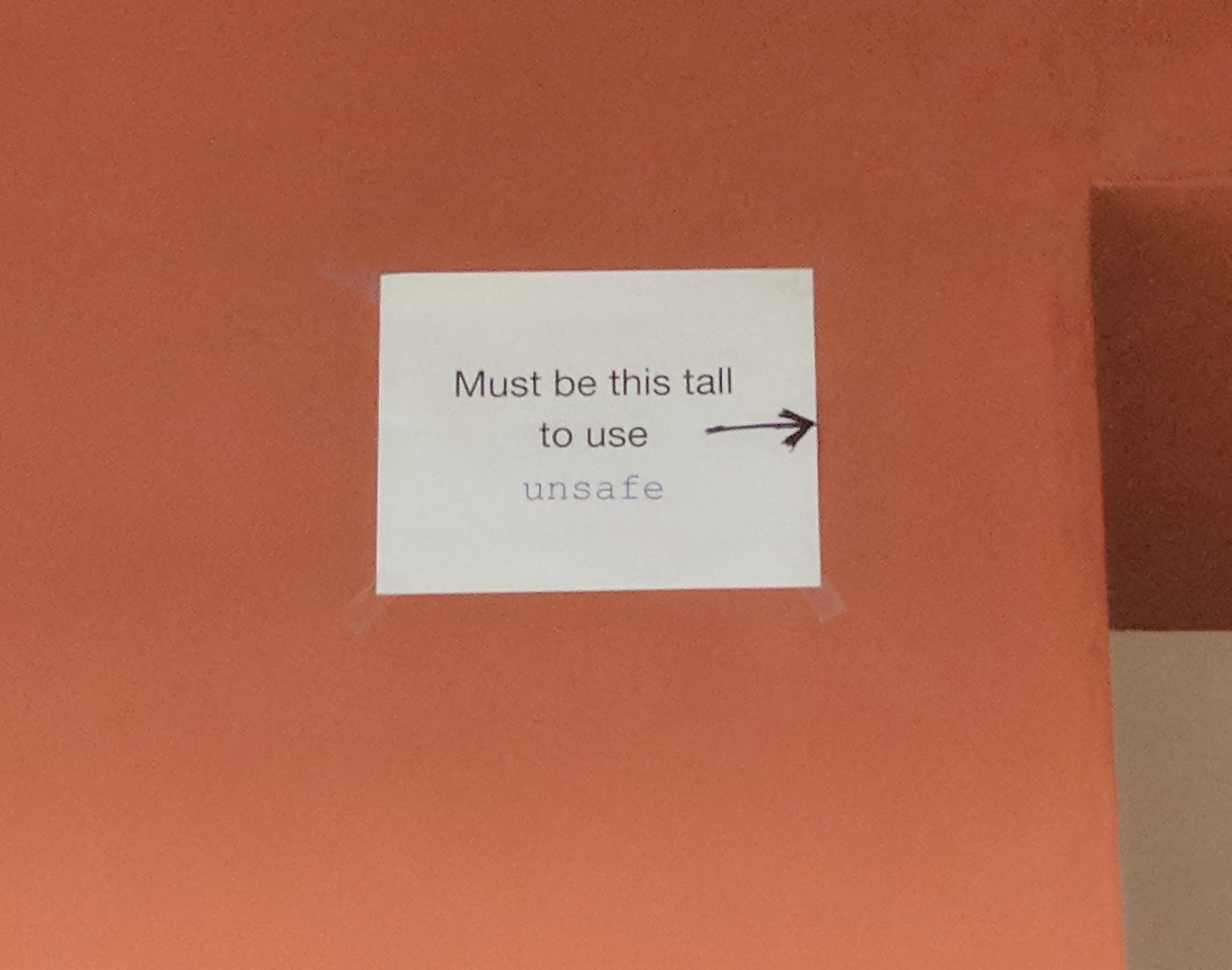 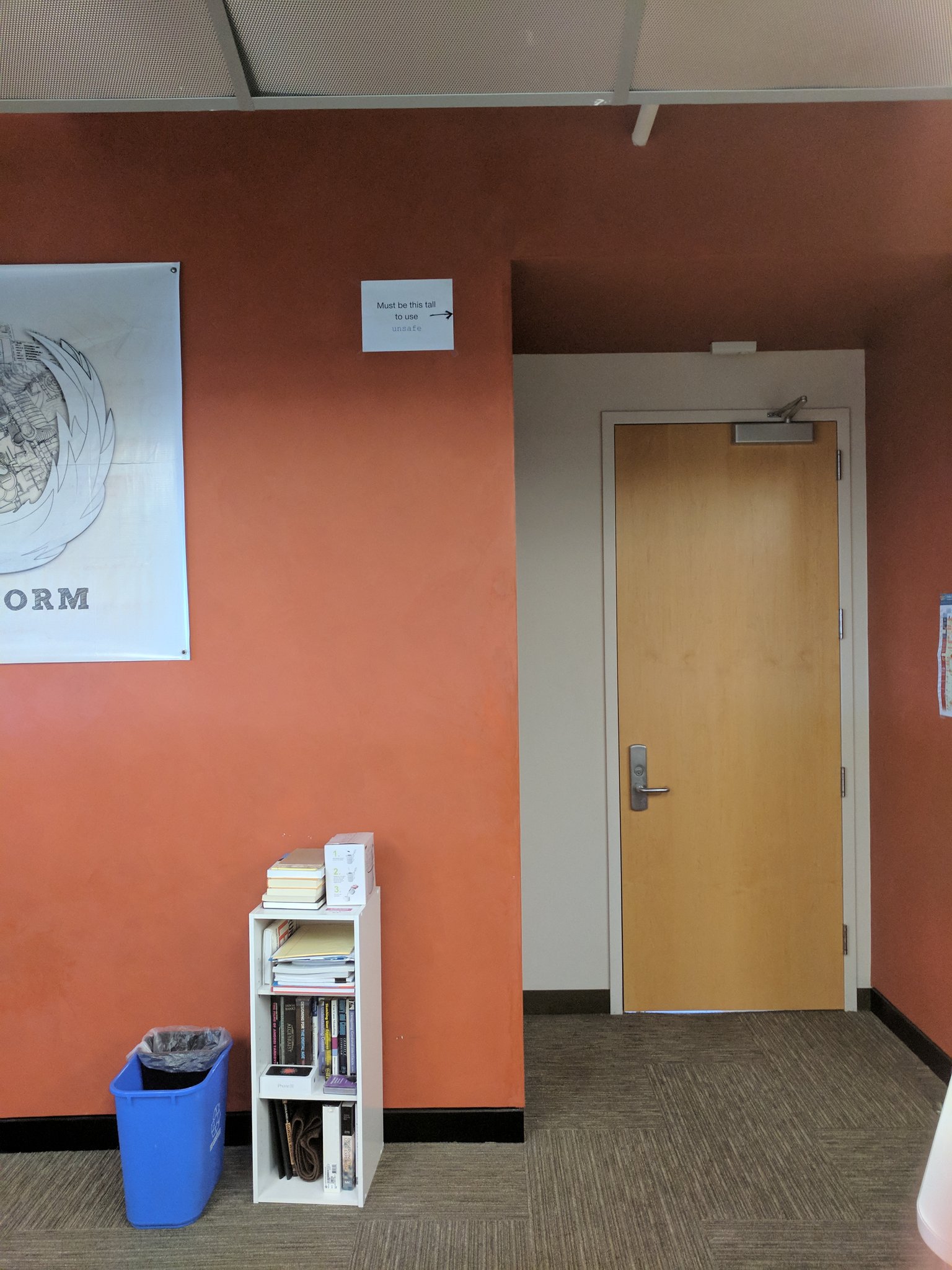 Although technically, I reviewed that original PR somewhat, as did Simon. Simon is a smart programmer, I make no claims for myself.

I'd rather remove humans as much as possible. A combination of Miri + Valgrind + Proptest + Fuzzing would make me feel better.

@memoryruins my personal desire is to have a valgrind plugin that checks for UB; I can't say whether such a plugin would have caught those cases, as I'm not sure of the error... @RalfJ is looking into this, however (the plugin, I mean)

I mean, some of the UB was already caught by Miri, just no one had ever run it before

@nikomatsakis what would such a plugin do that Valgrind doesn't already?

once we have them :)

Someone should start a team to construct those rules...

Why part of Valgrind instead of Miri? So that it catches codegen issues as well?

I'm reading blog now in case it's explained there

yes and so it can e.g. check C code

i.e., you could just run all your tests

if e.g. it has a ptr from Rust

then we don't care

OK, the amount of interop there makes more sense. I was thinking you were including completely distinct code.

An address in memory, and a tag used to store the time when the reference was created

Time to get those custom fat pointers working ;-)

@Jake Goulding lmao those photos. i agree with your sentiments for combination of checks

would be more consistent than only a group review

very keen to what ralf discovers while looking into the plugin

awesome that miri caught it too

miri caught sth else though

looking at https://play.rust-lang.org/?gist=7f32ef3123acb517dcfba377806f391f&version=stable&mode=debug&edition=2015, miri does not see anything... strange. or is that using a libstd without the broken VecDeque?

@Jake Goulding is there any way for me to see which nightly this miri is using?

You can look at the build status

which doesn't make any damn sense

considering it was installed a few lines earlier

hm I see. well I noticed that for nightlies it shows the commit, but doesn't show the toolchain name either

of course, with toolchain name != version shown by rustc --version, this is also not easy

@Jake Goulding that's a strange error indeed... I'd expect a build failure, but it doesn't even try to build miri?

oh I think I know what is happening

this is probably related to https://github.com/solson/miri/blob/master/rust-toolchain

I've disabled build failures (there's a || true) because I don't want a failure in a tool to prevent deploying the UI. I should change it so it shows up as red in travis though

I am still not sure what the best solution is there

so currently we put that into rust-toolchain, which means that gets used automatically by rustup

mmm. My build should /probably/ ignore that

yeah I think it should do that override

currently it doesnt find rust-src for the nightly-XXXX toolchain, hence the error

that error would remain even when we get miri green again

I think travis has an option to ignore failing some tasks

so then you could remove the || true such that travis knows the actual state, but still keep deploying the rest

it does; i just never set it up (or it wasn't present when I set it up x years ago)

The trick is that the playground doesn't use a build matrix directly. It uses build stages, which doesn't obviously have a fail is ok config

I tried to match the syntax but that doesn't seem right^^

of course they dont have a working syntax checker :/

wow so I have to repeat the allowed-to-fail config?

So I guess that would be the right syntax?

When I originally set it up, there definitely wasn't a way to skip build stages, which there is now

so that's another thing I wanted to revisit

hm not sure if I have to repeat the script part

but how else is it going to match?^^

why couldnt they just add a "allow_fail: true" to the individual job yml?!?

and no clear design

OTOH, at least they have matrices, which I wish gitlab CI had as well...

oh dang... yaml why are you so annoying

turns out false is not the program false, but parsed as boolean

Why Valgrind and not a sanitizer?

I don't really draw a strong line between those two, actually. :P But I do want something that can enforce the stacked borrows rules, which requires some "shadow memory" and so forth.